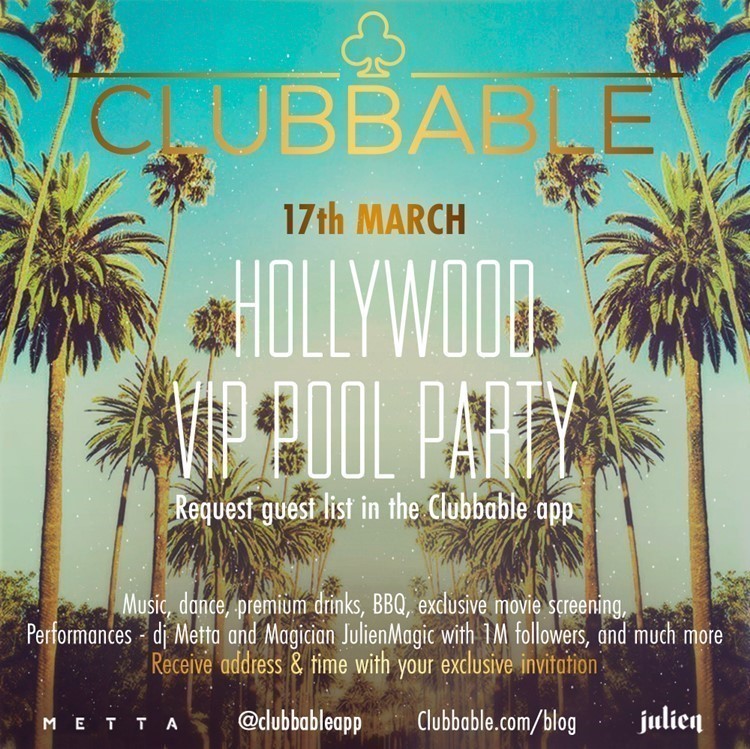 A fabulous VIP invite-only party spent with friends, pool playing, food, music, performances, dancing, premium drinks, going into the night. All at a fabulous Hollywood luxury villa packed with celebrities, actors, models and social media stars.. Can you afford to miss out on this?

To make the most of everything - combining good fun with a good cause - Clubbable is arranging the Clubbable app US launch party as a collaboration with musician Andrew Cole - the man behind the song #NoJoke with the star-studded cast and full length documentary film to combat bullying - to raise awareness of bullying, as well as to celebrate the launch of the Clubbable app in US. The event will be held in the garden of a extraordinary venue with jacuzzi, overlooking the city of angels, on Saturday the 17th of March between 7-11pm. If we’re lucky, some of the biggest stars of our world, participating in the #NoJoke movie, will turn up to this event to support the cause and mingle..

During the event there will be DJs, different spectacular performances, BBQ, as well as having people from many genres are attending; celebrities, glamorous movie stars and engaged film industry people, musicians, artists, social media stars, as well as getting covered by the press - there is certainly great networking, exposure and collaboration opportunities. We will also have a top quality video made during the event that everyone attending the party will get to participate in, which will later circulate on different platforms.

Our star performer is magician, prankster and worldwide entertainer Julien Magic who has over 1 million followers on Facebook and 686k subscribers on YouTube. With his witchcraft, he makes sure to take his audience on a spectacular journey of enchantment.

Playing as warm-up DJ for Avicii, Kaskade, Axwell among other renowned artists, DJ METTA is making a name for himself around the world and at the Clubbable Hollywood VIP Party, with his ‘progressive tropical space house’, which is described as “Nothing you’ ve ever heard before, because there is no sound like METTAs.”

Swedish LA-based upcoming artist and songwriter Manda Malina, is initiating the party with her band, playing covers of today's hottest songs, as well as Mandas own work. Having her single “Sweetest Heartbreak” on iTunes tracklist and placed 6th place in XFactor Manda Malina is a true rising star.

A interesting and innovative performance is to be expressed by Camilo Gomez, a live act with deep house.

An extraordinary performance will occur by the great ZOR - The FireBender. He will in a raging spectacle with flaming swords, DragonStaffs and ball chains captivate the audience with a breathtaking fire show.

The VIP Hollywood party will have the similar vibe as the hugely successful Clubbable launch party in Cannes during the film festival last year with lots of celebrities, as mentioned in award winning Huffington Post.

You’ll receive your exclusive invitation by email. Are you not invited? Request guest list in the Clubbable app. Some happily chosen will get to attend the fabulous party. To stay updated with the news about the party, make sure to RSVP to your email invitation, as well as click attend on the Facebook event and follow us on Instagram and Facebook.