Interview with a promoter 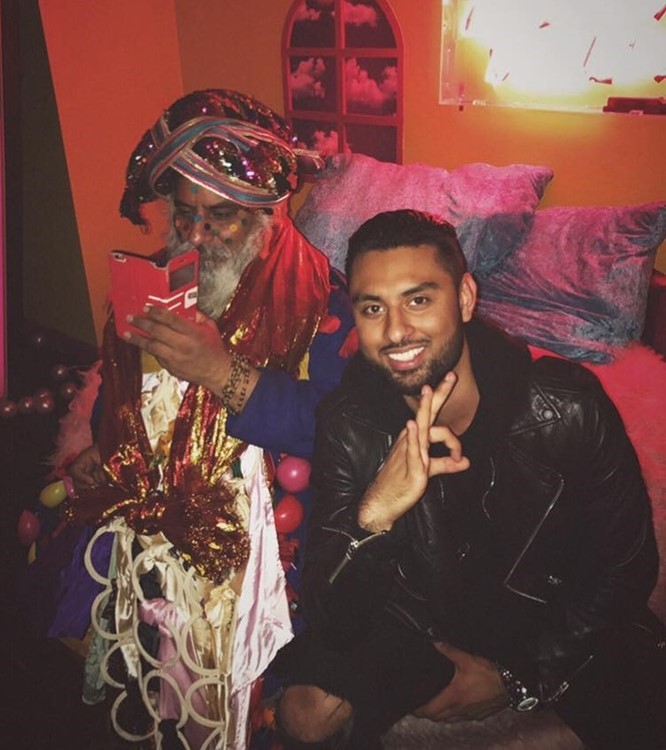 1. Hi! What is your name and where are you from?

Hi! My name is Shahzeb and I am from Gothenburg, Sweden.

2. For how long have you been promoting?

I have been promoting for 6 Months.

Well I had always been approached by promoters in the past to start promoting with them, because I had a wide network of friends who partied in Mayfair. However I was not into promoting, but one day a close friend of mine temporarily stopped to promote, so I jumped in to help out his “partner” and when the friend came back after a few weeks; I was not only enjoying it, but I was doing a good job which led to us all working together.

4. What do you do when you are not promoting?

I work full-time for Nigel Frank who are the global leaders of Microsoft Recruitment. I’m specialised in .NET & BI freelance market for Sweden.

5. Many promoters have a signature hat or outfit. Do you have one? If so, which one?

Well I recently started changing it up, but my signature outfit would be all-black (ripped jeans), leather jacket and designer black shoes. Finally, I always have a silver chain hanging on on the side of my jeans.

I might be somewhat bias but I will go for DJ Aik, DJ Jojo & DJ Toni Vegas (all from Maddox).

7. What songs should they stop playing?

I personally feel songs like “Oasis-Wonderwall” needs to stop playing in clubs NOW!

8. What is the best part about promoting?

For me, the best part about promoting is that I get to meet a lot fun people from all around the world who come and party with me. I get to party for free and earn money on top and also the network with lot of interesting people inside mayfair clubs.

9. What makes a club really good according to you?

2. Dress code is vital, should not have to be formal, but it has to be “Stylish/Swag”.

3. The DJ lineup should always be of good standard playing the latest music.

4. Occasional celebrity appearances is a must to keep the club hyped up.

5. The staff of the club should be fun and engaged with the guests.

10. What are your best pieces of advice you would give to a group of people planning to go out to a VIP club?

Well besides the fact that you need to dress accordingly to the club’s requirement, be on TIME (whatever time your promoter has told you). Also, let your promotor know the ratio guys to girls are because sometimes in the last moment, people decide to bring along more people and that just does not work out at times so they’re risking to not get in.

11. Which is your favourite night of the week to go out?

Personally I used to love Thursdays when I was a student but now I stick to Fridays and Saturdays. I Would love a Sunday night out in Mayfair as limited clubs are open and they are all full.

12. Don’t you get tired of going out all the time?

A lot of people ask me this but I love it! I work hard from Mon-Friday at my regular job which does not give me time for a social life outside of work. A lot of my friends come to Maddox, so I get to catch up and hang out with everyone whilst making money on top!

13. At what time do these clubs usually peak?

Maddox Club is known to peak late compared to other Mayfair clubs as the club runs until around 5 am so it peaks around 1.30 am. Other clubs such as Mahiki and Tape close at 3am so ideally the clubs start popping around 12.

14. What is the silliest reason you can remember that someone got rejected at the door for?

Well I have seen the occasional drunk people and guests who wear trainers who get rejected. The silliest reason I recall would be guests trying to get in with a fake promoter’s name as they did not have a promoter for the club. (Just be honest to the door manager and sometimes you do get lucky!)

15. What is the best excuse for forgetting to bring the ID you have heard?

Not heard many good excuses to be honest, but the silliest excuse would be when a guest had taken out her ID in the Cab to be “prepared” and that ended up with her forgetting it in the Cab as she put the ID down while drinking...

16. How often does it happen the guests have not dressed up enough to get in?

In general I think in all Mayfair clubs that happens every night, but with my guests it has only happened once. My guests know the dress code, and I always inform my new guests as I would not want anyone to get rejected!

17. If someone wants to become a promoter, how should they do that?

Well first step is to go out a lot to the club you want to promote for (I mean a lot! 2x minimum per week). Make friends with the regulars and the staff in the club and obviously the promoters you like. Final step is to bring a lot of girls and big groups to the club as this will catch the eye of promoters and regulars (the word spreads!) If the promoter is a good friend, he will want you to join, otherwise he will love for you to keep doing what you are as he/she will be earning loads from your guests! Alternatively, if you are a straight up person (which this job requires you to be), one can always make deals with a promoter to ensure you get paid for your guests when coming to party. I have personally paid some of my friends when they bring guests as sometimes it is a win-win!

18. What do you, as a promoter, like about Clubbable?

Clubbable is a great tool for people like me who have office jobs, because I do not have time to be out and about and meet new people and promote. Secondly, a lot of the guests I get are from Sweden (tourists), this enables guests to find me rather than me finding them on social media etc. Thirdly, the layout/design is cool and easy for users to adjust to. Lastly, love the fact that it provides us the platform to offer guests optíons such as  “Dinner, Free drinks & Free entrance”, as these are good selling points promoters utilise when promoting face to face.

It would be nice to message groups before they actually answer your invitation as this could actually change their minds to accept. Just like linkedin has “Inmails”, one could have a limit for messages, so one does not message everyone. As in real life one is allowed to talk to people and that gives one more chance. Also, it would be nice that promoters can give a rating back to guests (like uber) as sometimes guest-ratings can be inaccurate and the promoter ends up getting an unjustifiable rating.

Thank you Shaz for your time and great answers. We are looking forward to keep working with you. We have taken onboard your suggestions and will add a text field on the offers for trusted promoters. As for rating the guests, this is something we are still discussing but the first step in this is that we record if people did turn up or not so we will show the promoters the statistics on the guests in the groups that will indicate how likely they are to actually come.

If you are a promoter yourself you can read more how to promote for VIP nightclubs with Clubbable and also what a so called inhouse promoter is.